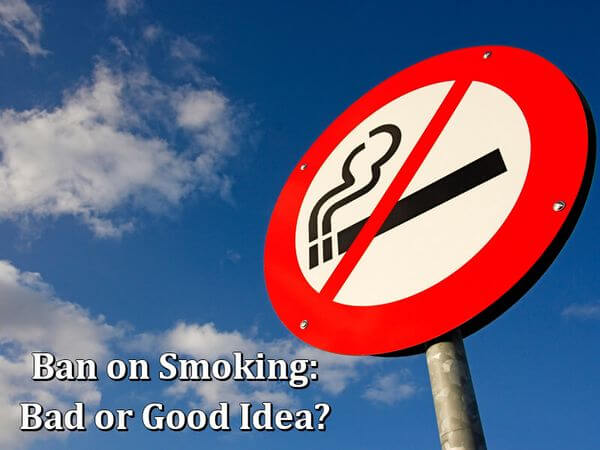 While finding a common ground on smoking seems next to impossible, non-smokers can boast of considerable success in their fight against smoking in public places. Recently, a number of laws have been passed to prohibit smoking in restaurants, parks, streets, etc. The ban is targeted at a large audience, thus alienating many customers in some establishments or even ruining businesses. It is the very reason for which the ban on smoking appears to be not such a nice idea after all.

The Situation in the USA

Similar to many other laws and regulations, smoking bans in the USA differ from state to state. In 2011, the American Nonsmokers’ Rights Foundation informed that up to 80% of the American population complies with some kind of a smoking ban. By the way, this organization went to great lengths to introduce these bans basing their actions on the claim that this would make the environment cleaner and free non-smokers from the need to inhale air impurities.

In reality, business owners do not want to prohibit smoking. At the beginning of the century, when the bans on indoor smoking were particularly rigid, the owners of nightlife businesses experienced dramatic financial losses. Since the clients were no longer allowed to smoke in the establishments where food was served, they refused to eat out. Some bar owners lost a part of their clientele, others lost their businesses.

No Smokers = No Air Pollution?

The central argument of the ban proponents stems from the fact that they refuse to inhale polluted air whenever a person next to them decides to smoke. The fear of so-called secondhand smoking makes them initiate and support the bans. The thing non-smokers ignore is that the air is already heavily polluted by vehicles, restaurant cookers, street dust or even nearby industries. Their pollutants are far more harmful than cigarette smoke. However, while occasional smokers have been made a scapegoat for air pollution, no one is trying to impose a ban on driving, cooking, producing goods, and so on.

Generally speaking, smoking is a matter of a personal choice. Moreover, most smokers respect the nonsmokers’ rights and preferences. On the top of that, before the ban on smoking became a law in the USA, most public establishments, such as restaurants or bars, had both smoking and non-smoking areas for their customers’ convenience. The areas were equipped with proper ventilation and air conditioning systems, preventing smoke from the polluting non-smoking areas and food.

Another argument in favor of smoking bans concerns children and their possible exposure to cigarette smoke. However, the bans are also imposed on the areas where no children can be found, e.g. nightclubs, restaurants, bars, etc. While there are solutions, which meet the needs of both smokers and non-smokers, the latter are not open to negotiation and continue the war against smokers. Being supported by government, they ignore the alternatives.

There are numerous options to address the issue in a way that would be suitable for both parties. Meanwhile, businesses continue to experience losses. Business owners should be able to make their own choice because the bans the Government keeps introducing do not solve the issue. Instead, they harm businesses and threaten the liberty of tax-payers.